In the past years, I have been liaising with teachers  who wanted to introduce programming to their students through the creation of games; several teachers have been using some of my resources (books and video courses) and found that it had helped their students to get started with programming while enjoying the journey and using a free game engine called Unity.
Last November, I gave access to these resources to several teachers for free, so that they could use it for their classes, if they found these to be a good fit.
So, I am renewing this offer for those who did not see it then, and also for those who have developped an interest in teh use of games for learning recently.
The books include:
The video courses include:
All the books and video courses include a practical approach with many hands-on activities (students will spend most of their time coding and building their game), checklists (so that the students can check their progress), quizzes (to check their knowledge), challenges (to put their skills into practice), FAQs, and lots of explanations (e.g., many screenshots for the books).
So I am giving away these books and video courses for free to 100 teachers throughout Europe on a first-come-first-served basis.
If you are interested in receiving these, please email me: learntocreategames@gmail.com or pfelicia@gmail.com
Also, I am aware that Unity may be quite demanding in terms of computer requirements for some schools, and I am planning on a series of books that introduce coding through the creation of games with JavaScript or Java so that itcan be used on less up-to-date computers; if this is a topic that you are interested in, please email me to let me know the topics that you’d like to see covered in this book; I will also send you a free copy of same when it is released.

In this section, we will go through an introduction to Java programming and look at key aspects of this programming language, including:

So, after completing this chapter, you will be able to:

Java is a high level object-oriented language developed by Sun. It is a multiplatform language which means that once it has been written and compiled, a Java application can run on most platforms.

The fact that it is an object-oriented programming language means that a Java programme consists of a collection of objects that interact with each other.

Java is used for many purposes, including the creation desktop or mobile applications or even games.

In the next sections, you will start to write your own Java code. For this purpose, you will need to use a code editor, and more specifically, an Integrated Development Environment (IDE). These IDEs include all the necessary tools to compile and execute your code, in addition to other options that will speed-up your development and also help you to keep it free from bugs.

Using an IDE will provide you with an easier way to create, organize and check your code, with some of the following features:

There are many free IDEs available with their advantages and drawbacks, including:

All these IDEs considered, we will be using BlueJ for this book, although you could use any of the other IDEs if you wish. BlueJ is an IDE specially developed for beginners. It won’t overwhelm you with too many features, but instead, help you to get started with Java and provide some very useful features along the way that will make your coding clearer, such as class diagrams, or code split into color-coded blocks.

You can download BlueJ from the following site: https://www.bluej.org/

Before you start working with Java, you will need to install the most recent version of the Java Development Kit (JDK). The JDK includes all the libraries that you need to be able to write, compile and run code in Java.

To do so, please do the following:

Once the Java SDK has been installed, it is time to install BlueJ, which is an IDE that you will use to write your code in this book. BlueJ was designed with Java beginners in mind and includes many features that make it easy to create Java applications. So let’s install this software:

If you are using a Windows computer:

If you are using a Mac:

Figure 1‑4: Installing BlueJ on a Mac

After this brief introduction, it is now your turn to code.

So that you get to experiment with your Java code, please do the following after installing BlueJ:

Figure 1‑5: Selecting a location for the project

* @version (a version number or a date)

// instance variables – replace the example below with your own

* Constructor for objects of class MyClass

* An example of a method – replace this comment with your own

* @param  y  a sample parameter for a method

Since we will not be using all this code, please do the following:

You can now do the following:

As illustrated in the previous figure, the text “Hello World” was written and displayed in the terminal window, based on your code.

We could now change our code to display a different message:

System.out.println(“Hello, this is my first line of code”);

In the previous code, we just modified the message displayed in the console window to add the text “this is my first line of code”.

About compiling and Java bytecode

When you write your Java source code, it is usually saved as .Java file. Once your file is compiled, it is converted (i.e., compiled) into bytecode as a .class file. This code, in turn, is interpreted by the Java Virtual Machine (JVM) that is installed on your computer and directly executed or translated into a code that the computer can understand (i.e., machine code) and execute. So, the JVM acts as a translator between your bytecode and the computer. The advantage of this approach is that given that a Java Virtual Machine can be installed on most computers, your code after being compiled into bytecode, can be executed on any computer where the Java Virtual Machine has been installed. You can therefore compile your code once and run the code virtually anywhere.

You may wonder how the JVM is installed. Well, when you installed the Java SDK at the very start of this book, it installed, amongst other things, a JVA Runtime Environment (JRE) that includes the Java Virtual Machine, as well as the Java compiler.

You can see both the .Java and .class that have been created and compiled in your project, if you navigate to the folder that you have chosen for your project initially. For example, in the next figure, you can see that several files, including MyClass.Java and MyClass.class, that belong to the current project.

As a way to say thanks for being part of this list, and to help you kick start the Christmas Season  in style, I am offering 50% discount on all my books and online courses until midnight this Friday 21st December.

So here is how you can get your discount for the books:

This is offer will end in less than 48 hours.

PS: I don’t do this often, so take advantage of this great deal right now before it’s too late. 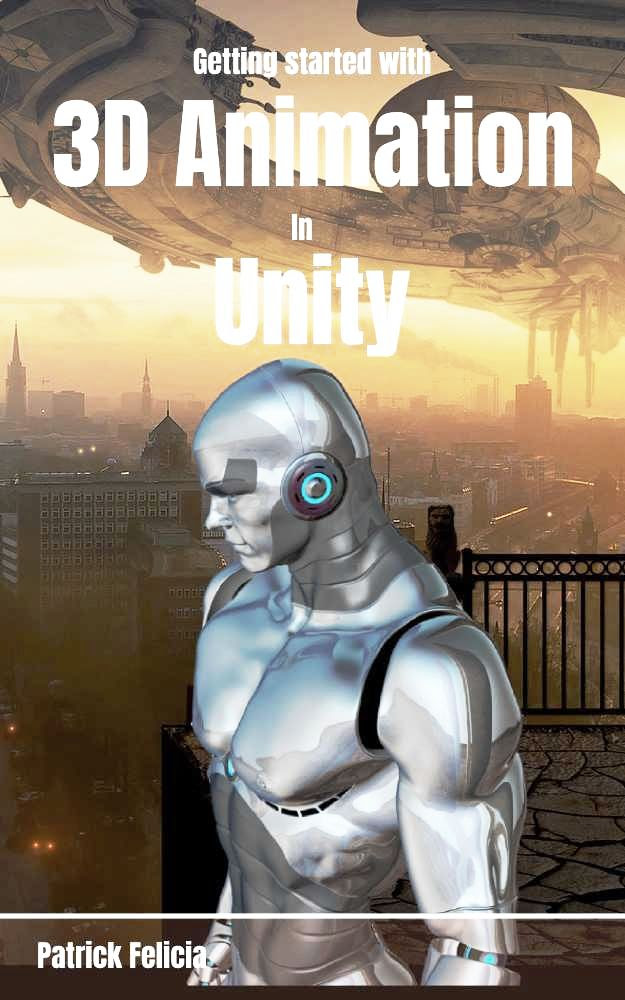 Being able to animate your 3D character and to control it through C# is quite important because it makes it possible to make your game more engaging, to include characters that look believable, and to build games that are more fun to play; so knowing how to animate 3D characters can certainly boost the appeal of your game.

Now, there are many books and resources on 3D animation; however, it is difficult to find a book that doesn’t overwhelm you with too much information at a time, and that guides you step-by-step in the process of becoming proficient in 3D Animation in Unity.

>> Getting Started with 3D Animation in Unity is out today at $1.99: Grab your Copy today before the price goes up tomorrow . <<

If you need to get started with 3D Character Animation, and to understand the different aspects involved (e.g., Mecanim, Finite-State Machine, transition, Animator Controllers, etc.) in a very clear and understandable way, then this book is for you.

In this book, you will not only learn 3D Animation in Unity but also enjoy the journey, without the frustration. It includes five chapters that painlessly guide you through the necessary skills to animate and control 3D Characters in Unity. It assumes no prior knowledge on your part and ensures that you have all the information and explanations that you need every step of the way. All the information is introduced progressively.

After completing this book, you will be able to:

Getting started with 3D Animation in Unity is available today for $1.99 (before the price goes up to 2.99 tomorrow)!

In this section we will discover how to add NPCs and give them basic intelligence so that they can follow the player .

END_OF_DOCUMENT_TOKEN_TO_BE_REPLACED

As you build-up your game development skills, you may often be on the look-out for your next game idea; often, this happens to be a difficult process; you may feel stuck first, wondering, how you will be able to find an idea that is both original and challenging for the players; so, in this post, I will cover a few principles that you can start to use to draft and start to design the key mechanics and goals for your game. END_OF_DOCUMENT_TOKEN_TO_BE_REPLACED

In most of the games that you will create, you will, more than likely, include the concept of time. This may mean a timer indicating how much time remains before the player loses, or simply, the ability to pause the game.

So first, let’s look at the following snippet example that implements a timer:

If you were to create a countdown, the principle would remain the same, except that the variable time would be initialized to a value that is greater than zero and then decreased every seconds until it reaches zero.

In Unity, it is very simple to pause or resume your game, using the following code:

Time.timeScale = 1;//time is back to normal

When creating your game in Unity, most of your C# scripts will generally be linked to an object. Because these scripts include different types of information, you may sometimes need these scripts to communicate between each other.

END_OF_DOCUMENT_TOKEN_TO_BE_REPLACED

As you create your games, there will be times when you will want to control some parameters at run-time to perform tests. For example: you may want to be able to modify a variable inside the Inspector while the game is running by typing its value or by using a slider to make this easier. In both cases, you will need to modify the Inspector and the way data is presented within.

Thankfully, Unity makes it possible for you to perform these changes from your own C# script. The first thing we could do, is to make our variable public, as all public variables are available and modifiable in the Inspector.