In this tutorial we will learn a bit more about how vectors can be used to simulate the movement of an airborne solid overtime, this will include derivation, integration, vector transformation, forces and acceleration.

In the previous sections, we have learned the basics of vectors (e.g., magnitude, unit vectors, directions, multiplication with scalars, and dot products). We will now, learn a bit more about how vectors can be used to simulate the movement of an airborne solid overtime, this will include:

This tutorial should take 20 minutes to complete

More importantly, you will understand how these relate to your game development as we will see how they can help to do determine the trajectory of an airborne projectile.

Airborne objects can be found in many games; and to make their animation realistic, it is often important to understand and compute animations based on physics’ laws; this can be applied to both 2Dimensiotnal and 3Dimensional objects. For example, in the game illustrated in the next image, each tank (blue and red) need to fire a projectile and destroy the other tank. The trajectory of the projectile will usually depend on the orientation of the canon and the initial speed of the projectile.

Before we start with the maths, let’s look at three concepts that we will be using in this tutorial: acceleration, speed, and position. These three concepts can be represented as vectors as they have both a value (or intensity) and a direction. The position can be expressed using three coordinates (x,y, and z) and help to locate an object in a three-dimensional space. The speed can also be expressed using three coordinates (x, y, and z) and help to determine in which direction this object is traveling. 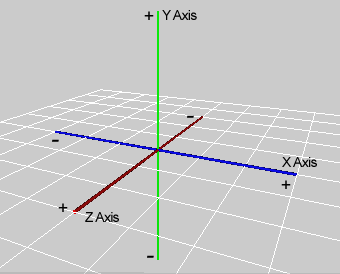 The speed is a change of position over time: the speed of an object is usually determined by a difference of position over a specific time. For example, moving from the point A (0,0,0) to B (1,1,1) in two seconds, implies a speed of: (A-B)/2 .

The acceleration is a change of speed over time: the speed of an object is usually determined by a difference of position over a specific time. For example, changing speed from V1 (0,0,0) to V2 (0,1,2) in two seconds, implies a speed of: (V2-V1)/2. In car simulations for example, while two cars may be able to achieve great speeds, the car with the greatest capacity for acceleration has an considerable advantage.

The term derivatives, although it may sound more complicated than it actually is, indicates how a quantity or variable will change when another (or other) variable(s) change (s). Derivatives, unlike averages, can give the value at a given time and they are usually expressed as follows Derivative of x in respect to t: dx/dt.

You can  think of derivatives and integrals as a ladder:

As we will be working with integrals, in the next sections, there are some rules that we will be able to use so that we can determine speed and position overtime accordingly.

To integrate null values, the following formula can be used:

In the previous figure, the sign before the zero is the integration sign, and dt means “as time changes” or “over time”. The equation means “The integral of zero overtime is a constant (unknown yet).”. For example, if we had to integrate a null acceleration to find the speed, we will obtain a constant speed. This would make sense, as not accelerating means keeping the speed constant. So far so good :-).

In the previous figure, the sign at the start of the line  is the integration sign, and dt means “as time changes” or “over time”. This equation means: “The integral of the constant overtime equals this same constant multiplied by time (t), plus another constant c (that is unknown yet).” To use the movement analogy. Let’s say that we move and that a constant speed on the x axis. Our position should then be a linear function of the speed. So if we start at x = 0, and we move towards the positive x-axis at 2 meters per seconds. We will be at x=2 after 1 seconds, x=4 after 2 seconds, x=6 after 3 seconds and so on. So the position will have the form x = 2 * t. But again if we had started at x = 2, we would need to add 2 to this total so that the position over time is x = 2*t + 2. If you compare this equation to the one highlighted above for the integral of a constant, you will notice that they look similar. The only difference is that the constant here equals 2. You may have noticed that I used the term linear function above. If this is unclear to you, or you don’t know the term: let me explain. if you use a 2Dimensional Cartesian referential and use the horizontal axis to represent the time and the vertical axis to represent x, and you plot the points that correspond to t=2*x t = 0 (t=0, x=0), t = 1 (t=1, x=2), or t = 3 (t=3, x=6), you will see that they are on the same line. So t and x, overtime, describe a line; so their relationship is said to be linear.

Integrating the product of a constant by a function of time:

To integrate the product of a constant by a function of time, the following formula can be used:

Integrating the sum of two functions

To integrate the sum of two functions of time, the following formula can be used:

Newton to the rescue

Well, you may have heard about Newton and how he determine laws that explained, amongst other thing, gravity. One of his laws specifies that the net force applied to a solid during its trajectory equals its mass multiplied by its acceleration; which can be expressed as follows.

So if we know the forces applied to a solid overtime, we can calculate their sum (net force), and then determine the resulting acceleration. Once the acceleration can be identified, as well as the initial conditions of movement (e.g., initial position, speed, and acceleration) the corresponding speed and position can be computed at all times (with successive integrations), hence allowing us to recreate the trajectory of an object over time.

Determining the trajectory of an airborne object only subject to gravity

In this section, thanks to our knowledge of integrals, we will determine the trajectory of a solid only subject to gravity. For those only interested in the code to simulate this movement, you can jump to the coding section.

Decomposing these forces makes it easier to analyze them. The only forces applied to a solid in the air (neglecting air friction and spinning) is its weight; which means that:

In the previous equation:

Note that g is approximately 9.81 on planet earth; however, it would have a different value on a different planet as it is linked to the radius of the planed and its mass.

Provided that gravity is vertical, the component of the acceleration would be as follows:

We also know, based on the previous sections, that the acceleration is a the derivative of the velocity. Inversely, the speed can be obtained by integrating the acceleration. Integration makes it possible to determine the value of a variable from its derivative.

So the velocity can be determined as follows:

In the previous figure, the first line indicates that the speed is the integral of the acceleration overtime and the next lines show this equation on the x-, y-, and z-axes.

Based on the previous equation:

In the previous equation: c1, c2, and c3 are constants that we will determine later.

To determine these constants, we will refer to what is called, the initial conditions.

However, based on the equations we have found above, we also know  that:

If we combine the two sets of equations, we obtain, for t = 0:

This, in turn makes it possible to determine Vx, Vy and Vz over time (since we now know the value of c1, c2 and c3):

In Unity, we could simulate this movement as follows.

Let’s analyze these equations on each axis; on the x-axis:

Or we know that Vx (t) = Vox; and V0x is a constant; we also know that integrating a constant is the same as multiplying it by t (time) and adding another constant.

To determine C1, we will, as for previously, look at the initial conditions (just before the movement starts). At t = 0:

We know that Vz (t) = Voz; and V0z is a constant; we also know that integrating a constant is the same as multiplying it by t (time) and adding another constant.

To determine C3, we will, as for previously, look at the initial conditions (just before the movement starts). At t = 0:

At this stage there are two things we can do to simplify this expression:

We can then obtain:

In the expression above, we can see that the integral that we are looking for is made of two parts, that we can call A (highlighted in green) and B (highlighted in red).

The second part (in red) is rather easy to calculate as it is related to integrating a constant (V0y), and we have covered this in the previous sections; the result is as follows:

For the second part (green), we can notice that it looks like the following:

This is the same as integrating what we identified as a polynomial early on; and this can be done using the formula:

So, we can then obtain:

If we replace n by 1, this can also be written as follows:

To calculate the constant, we need to evaluate the speed position at t=0. At t=0 y=y0 but we also know, based on the previous equation, that at t=0:

So, based on the two previous equations. constant = 0, which mean that:

The code for the movement would be as follows: